Have a great weekend!

Just curious on the reasoning behind this change? It was nice to use the box selection (top left to bottom right) for quick selection orders.

Maybe a menu option could be considered to select which method the selection box uses. Whether to select the fixtures in ID order of by the order of the 2D layout.

Thanks for considering. Keep up the good work team!

There should be more options to my opinion!
But certainly it is correct not working " only by pixels" but also with id’s ,and other options,it would be interesting if user can choose how fixtures must be selected!
To my opinion not all the world works by fixture lined up in straight lines, and most designs that are imported from 3d projects may have different positioning.
So a selection that doesn’t respect id or the way you are selecting "just because it’s by pixel"doesn’t make much sense!
Then it should be selectable from left to right ,right to left ,up to bottom ,bottom to up etc…

Can someone explain this? 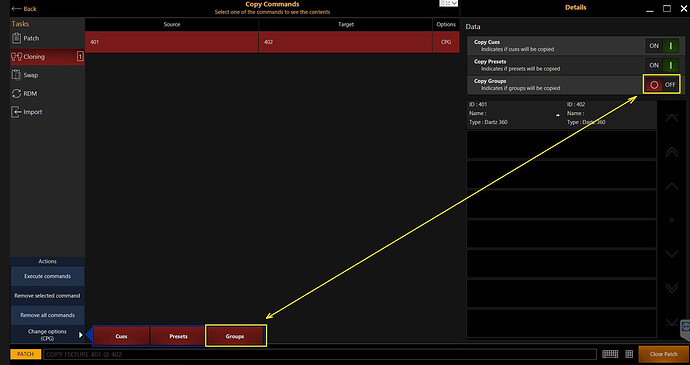 Before, the selection order was rather “random”, now it’s “predictable” at least.
Plan is to provide several options indeed, but that would have taken us too far for a maintenance rollup: those are limited to essential fixes and smaller quick wins, not new developments

I leave a box of “thoughts out loud”.

when will it be possible to clone with separate parameters ? at least the current one will do it well and fast ?

2D is part of the undo syntax ? it’s a problem not being able to use it when a thumbnail moves from place to place in pixel or complex configurations, it would be great if the encoder can move them “something that has already been invented”.

the keyboard shortcuts are mediocre considering that they depend on the touch screen, and those who do not have one ? are slaves to the mouse

timecode and MIDI with the latest update is released with a LIVE8 license.
my question is ? what do they offer to make it worth it !
lighter interfaces $% use very good syntaxes

Okay that makes sense. I guess I was under the impression that the direction of the box “drag” would also dictate the selection order. IE, Top left to bottom right would be one selection and then bottom right to top left would (in a sense) be a reversed selection. But then again, I never did that very much, as most of my group selections are already done. Anyway, thanks for the clarification and the “look” into the future of making that more “option based” on user preference.

Keep up the good work,

Having some strange issues after a “RECORD” to an OVERRIDE of a Dylos fx ,I was not able to clear because the clear" led "was not lit, and even after hitting it anyway ,nothing happend, the fx was still running.
Tried also releasing all cues,even that didn’t help , after a total restart of the software “on pc” it worked correctly!
I have uploaded the video about it. = )

Same to me, after record or updating a cue.

The Programmer Clear issue is not related to Dylos…
It is a major bug with 1238, which also been reported on our Facebook page…
It happens frequently, so really a bad issue

I didn’t see any official reply to this yet, but it must be fixed, as this is a show stopper issue

Anyone care to reply on this?? 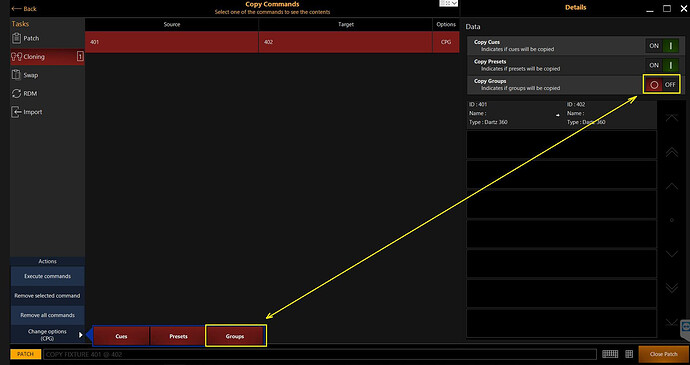 Any update coming to fix the programmer issue soon?

We’re looking at it

The data panel on the right doesn’t appear to update until selection has changed. The value of the Options column is the authoritative indication.

Gert, I was wondering why do we need the 2 panels at all…

If we added the new, enhanced panel, I think the old one can be removed …

As it is, I think it’s just confusing our users…

They have different scopes, though: the toggles on the right apply to the highlighted row, while the action (bottom left) is global (applying to all rows at once, with the bug being that it is not updated on the right until you change selection, but also for new entries that will be added).

Thanks for the info Gert…

However, I don’t see any mention on this new feature, either on online manual, or Release Notes (other than ‘improved Clone/Swap interface’ which explains nothing about this new functionality…

How does these 2 command sections interact with each other?
Which section has priority?
I guess right panel act as extra filter, to the left (old) one?

So, if Groups option is disabled on the left section, it isn’t valid, on the right panel?

All of this, should be highlighted on the release notes, and explained in the manual…

The right panel is just a details section for the highlighted row, for fine tuning individual entries in a batch. The left section is about the entire batch and defaults for adding new entries.

I write the release notes merely as a checklist for the manual writers, trainers, … Only a general release (like 1237) would actually be held back until documentation has caught up.