During a show last night, in the middle of one of my programmed looks, everything froze where it was and some pop-ups started coming on screen that looked like Windows installers, an then error message popped up. “Error 2908, could not register component”. Options were to either cancel that error message, retry, or ignore. If I canceled, for several minutes there would be some windows installer Windows popping up and saying they’re loading something, and then that same error message would pop back up. If I hit retry it would just instantly pop back up again no matter how many times I pushed it. However if I hit ignore, the system would try to boot and all the error messages finally went away, but after all of that 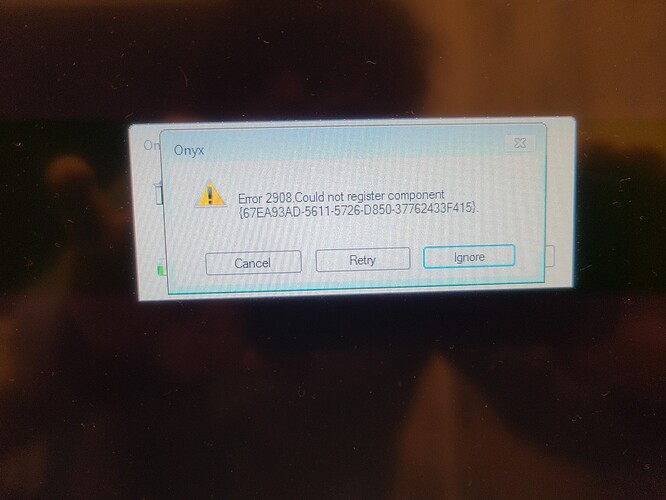 20210312_2330284032×3024 1.98 MB
I had no control of the desk or the lights, except from the touch screen oddly enough. I even lost mouse rollerball and click control from the desk, none of my faders or buttons worked besides the touch screen. I rebooted the console, unplugged every cable from the back and plugged it back in, still get that error message after rebooting the console. All the lights have saved their DMX info, so they snapped back to that Frozen look if I power down the system and turn the lights on from our separate touch screen module instead of from the desk. if I ignore the message enough until they all finally go away, then once the desk does boot, it skips the normal boot pages and skips where I can continue for my previous show file, and go straight to an onyx menu that has nothing of mine loaded to it. And still no control with the mouse or anything, can just navigate from the touch screen. Anyone seen this happen before? I’m an audio guy primarily so I’m a bit out of my realm here but any help would be appreciated! Image attached of error.