Wonder if anyone can tell me this. Light Jockey Question.
When I load a Cue, I can I program a button (MIDI or Light Jockey Launcher Touch Panel Button) to disable (stop) one of the 12 sequences in that Cue. But as soon as I load a new Cue those Disabled ones turn back on again. How can I stop that from happening?

The first part is easy. There are function buttons which allow you to clear a cue slot. There are also toggle slot on/off and cue slot stop/go buttons, which might also work, depending on whether you want the slot to just stop and freeze or to be altogether invisible.

Each type of lights gets it’s own sequence. I build the sequences into Cues.

At some point I would like to lets say mute (shut off/ no light coming from) my LED bars (for example).

Sure I can program a button todo that a few different ways. But how can I program that so when I load a new cue those LED bars stay off. Cause as soon as a new cue is loaded all turn back on.

Why, Now, i’m still testing and doing all of this with a mouse and clicking. So is there a command that wont let them turn back on until a hit said button (or another button) again?

Now, you have to program everything with this in mind. Since there are 12 slots in the cue, I broke my programming up into the following chunks: 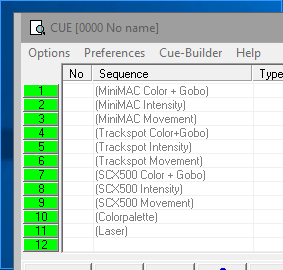 So my sequences, when I programmed them, focus only on the attributes listed in the slot labels. That means you must have all other features of that light turned off or it will screw things up when you go to the cues.

It is a pain to break things up this way but… once I had the sequences broken up this way, the mix and match becomes really easy and I can assign flash overrides to color+gobo or to intensity or movement.

I can turn groups of fixtures on and off without messing up what other fixture groups are doing. I can improv the lights all day long. I can start with a full scene with all the fixture groups going are change things out at will using transparent cues and feature segmented sequence programming.

I dont think I can use this. I dont have a guy running lighting so much as me DJing and hitting some pre programmed lighting scenes. I have a photo of my setup attached,

See How I have the on off buttons setup for each type of lights. I need it simple like that. I can’t be dragging sequences into the cue list mid way through the night.

I have Flash sequences setup to override and they work great.

If you are using the slot on/off toggles to the left of the Sequence list in the Cue window, which I believe you are, then I’m sorry to be the bearer of bad news but afraid you have already been given your answer and there is unfortunately no other solution; Repeating the question will not, in this instance, produce a different answer.

The only way to achieve what you are asking is with, as already stated, Transparent Cues, which depending upon how your Sequences have been programmed may require, at best, just your Cues to be reprogrammed, or at worst, both your Cues and Sequences to be reprogrammed. I’m sorry if you also do not like this answer but there is no other way around it; LightJockey just cannot do what you are asking in the manner I believe you wish.

Please don’t interpret the tone of this reply as being rude, that is absolutely not the intention. Its simply worded, such as it is, to avoid the possibility of doubt that there is another answer. If you require any assistance restructuring/reprogramming please do not hesitate to ask. It may also be beneficial to upload a backup of your user library, to some publicly accessible cloud storage, so that we can download it, have a peek inside and thus advise you better; I’ve personally have lost count of the amount of other peoples libraries I’ve downloaded over the years and worked with the user to solve “problems”.

Hey DJ Shades, Thanks for the help. Before I get to uploading which I will do in a couple of days. when im at the club again.

I see and understand havok’s method of transparent cues. But this requires that I be looking at the sequence list and manually loading in sequences does it not?

If not, how could I program a midi button to load (for example) a Moving heads intensity and colour combo sequence into the slot in the cue it suppose to go into. If i can’t do that with MIDI can t be done with the touch panel interface?

Using the mouse and having LJ’s actual window open isnt an option, I need to be able to control this from the touch screen or MIDI device. I’m very comfortable with MIDI and the program Faders7 which gets MIDI into LJ. I currently use a combination of Faders and LJ’s native MIDI in functions. All MIDI messages come from touch OSC or a Pad controller.

A trick I use to get what you’re looking for is to make a Static of the group you want set to Off. That will force the lights in question to stay off no matter what the cue tries to do (unless it’s in the Background Cue).

Statics are a very powerful tool. I wish Onyx had them.