Since the recent news came out that the M1 and M2GO would no longer be supported due to “aging hardware, outdated processors and lack of graphics support for DYLOS.”, I’ve been wondering if the M1 actually could handle newer versions, of course with some upgrades.

The M6 will be receiving a user installable (or at least hopefully user installable) upgrade that will allow it to run later versions of Onyx and DYLOS, so why is it that the M6 gets a special treatment while us with the M1 are stuck!

Looking at the interior of the M1, the board looks like your typical (albeit outdated) Mini ITX board, which theoretically could be upgraded to a newer industrial level board and new CPU like the M1HD or NX4. 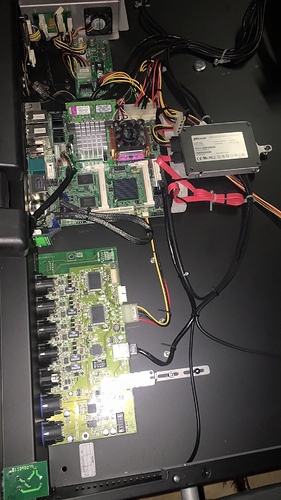 This would get around the issue of outdated hardware and processors, and lack of graphics support. This seems entirely feasible as it would allow the older M1 to keep up with more universes/features.

Of course, the M1 wouldn’t have the updated screen as the M1HD, but that isn’t entirely necessary to have more computing power.

This upgrade would require finding a compatible board and heat sink combination to fit inside of the M1 and be adequately cooled, as well as have the same standoff locations (which shouldn’t be too difficult, as they sell low profile CPU heat sinks, and Mini-ITX boards typically have the same screw hole locations). The M1 motherboard back plate is also replaceable which would allow for a seamless motherboard install.

The second obstacle would be to make sure the PSU can handle the new motherboard/cpu combo, but there are specific CPUs designed to run cooler and with less wattage in applications specifically like this, like the Intel T series.

Thirdly, and a large concern, is licensing. I’m not aware of how the M1 licenses itself as it is internal. If the license is stored on an internal USB key, then theoretically it shouldn’t be difficult to transfer the license. If it isn’t, however, then I’m not entirely sure how the M1 would be licensed with a new MB.

Lastly, and a very large concern, is driver/OS installation support. Since this is a Frankenstein system, it would be interesting to see how the OS would be installed on this system, as it has both newer components, such as the MB, and older components, such as the screen. If the same MB was used as in the M1HD, then technically the M1HD OS could be installed, but questions would arise with the screen drivers. It could be possible to install Win10 directly, but this wouldn’t be an embedded OS like the other consoles, and would simply be a full featured OS. And then arises the issues of drivers once again. So it’ll be interesting to see what could be done in that regard. Possibly a custom OS image?

Just my thoughts. Not sure if I would attempt this but I’d love to hear your thoughts and suggestions on this upgrade, as well as the moderators and people who actually are from Martin/Onyx such as Matthias and Ofer_Brum

The M1 licenses will not unlock ONYX 4.3 or higher. Doing an upgrade to a 10 year old console design is not something we wanted to offer as we can not ensure a great experience with old faders, small single touch screen, LCD buttons etc. There are many more aspects to a manufacturer doing such a kit than a user and just a quick calculation made this cost prohibitive. We preferred to invest our resources into new and well designed hardware and software.
You are free to modify the console as you see fit, but we will not offer technical support for them. I hope you can understand our position.