since days I tried to get something like this: But this behaves totally different in either the latest released version and also the beta version.
Is this is bug or am I doing something wrong? I mean I do exactly the same as shown in the video, but it doesnt really mirror the effect as shown in the video (and as I would expect it to be).

Have you used this feature in a previous version or even ever before?
I hope you are aware that you need to apply a FX Timing option whether that is nth or a delay doesn’t matter. Fanning only offsets your values from fixture to fixture. ->Resulting in a synchronous but offset movement.

If this doesn’t help maybe describe how far you DO get and what you see.

note: when using tilt, the beam lengths will only change. The video you sent uses pan.

no I havn’t cause I just have started using Onyx. Really impressed so far.
So to take your example what I want to do is having all 6 devices doing a circle, but the left 3 clockwise and the right 3 counter clockwise. I would assume I would have to do something like this; 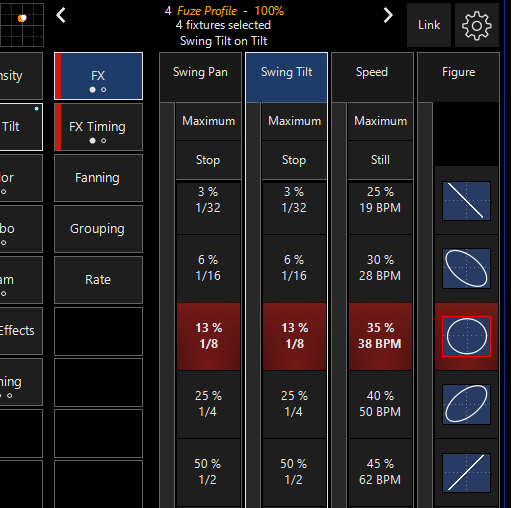 But as you can see in the screenshot they are all facing in the same direction.

When I create a fanned mirrored effect on the intensity channel this worked like a charme:

you can see that the sinus of going from the left an right into the middle.

I honestly have to admit, that this was something I had to try around with quite a lot because I don’t use this feature very often.

How to actually get what you want to achieve:
Now I am not sure this is the fastest way to do this, I would appreciate if @Matthias could verify or suggest a faster way to do this but:
You can select the whole group of fixtures you want to include in the effect, select your pan and tilt swing across all, select shape THEN use the grouping tools to block-select or Divide half of the fixtures and change the Mode (function direction) in panel 2 of FX.
Select all fixtures again and set the speed.

Some notes that could be bugs but I am just not sure whether they are:
-You cannot change the direction whilst lights are moving a.k.a speed >0, otherwise timing will be offset

I also did some more testing on that feature. For me this simply looks like that if you Fan and Mirror the pan channel it only applies the fan to (if devided by 2) the channel, but it doesn’t apply the mirror

image1606×606 57.6 KB
when I do the same with the Tilt channel it perfectly mirrors the movement:

Your workaround (chossing different directions of the circle) works, but I still think that this is a small bug.

I will try to get an older version of onyx and see if thats the same there as well.

While that does looks great I am not able to recreate your setup for some reason.

In the end the setup itself is not relevant, I also tried that with 4 moving heads (some martin) with the same result. So you could use any fixture I guess and try those settings.

Do you know if there is any older edition of onyx that I can download somewhere to test this? I didnt find any
Regards
Philipp

Yeah, thats what I mean. Ignoring the setup, I cannot achieve the fanning/mirroring as you got it to work.

What do you want to test? Why would you need an older version? 1193 is the oldest version available here: Downloads (obsidiancontrol.com)

I just did a short video to show you what I do exactly and what happens with the fixtures.

First. Make sure you understand the basic grouping tools and how they operate. You will quickly see, that Mirror doesn’t actually result in a 50/50 fixture selection.
And I think this is here we went wrong.

Now that you have seen how you can use the Block or Divide tool to select 50% of your fixtures, you can look at how the FX/Fan addition works:

So in conclusion the FX addition and Block select does exactly what replied at the very beginning. Just automatically.

This makes a whole lot more sense now. To me at least. There is no real Bug in the system that always occurs. Only some weird FX shenanigans but I think this is OK for now.

Thanks a lot Philipp, I have learned a lot throughout this. Thanks for posting and asking. I hope you will catch how it works too now. Lets stay in contact if you like.

That is part one to the equation.

So to take your example what I want to do is having all 6 devices doing a circle, but the left 3 clockwise and the right 3 counter clockwise.

Since Fan/FX affects both pan and tilt, it will inverse both of them, effectively giving you two set that rotate in the same direction (CW or CCW). If we look at just the tilt for a CCW CW movement, we see, that they are equal across both halves of the selection. In order to get that, either dial the primary FX like speed and swing first and then disable PT Combo on page 2 of the FX OR start off with PT Combo off and dial it in later. 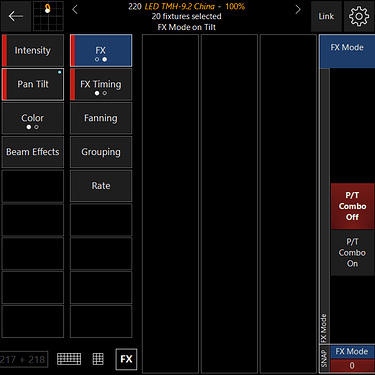 I will also play with that a bit (hopefully tomorrow). But that whats in the definition of grouping now makes sense. Still confused what they did different in the video in my first post.

But sure we can stay in contact if you want to.

I just started to use Onyx about 3 weeks ago and was really impressed.