Philipp and I have found an ambiguous situation, sparked by this video:

The video shows two groups of 4, running a pan Wave FX in inverse direction. All good and fine but the method he uses seems intuitive but yet, no longer possible.

In the video, he uses the fan <> mirror grouping tool to split the 8 fixtures into two, symmetrical groups of 4, from inside to outside (more like the divide function), which then both follow the pan wave but one from RTL and the other one from LTR (CW vs CCW rotation).

The current mirror mask, according to the reference, is more like a distribute+fan function.

Following the video steps, one is able to create the effect but the pan wave is offset by about 10%.
This is similar to what I found an reported HERE with the normal FX and wave and inverse wave functions.

Where is this offset coming from? When have things changed? Is there a workaround other than selecting the two groups and inverting their direction manually?
The feature as it used to work was great and it would be a shame render it useless for pan operation.
@Matthias

is there any progress?

Sadly no, allthough I think this should get some more attention

Fanning changes the position of the fixture on the cycle. It does not change the actual curve.
I dont see anything that works differently on the fx system. To invert Pan or Tilt try to t use the Pi or Ti curve for a symmetrical / mirrored look, not the grouping/mirror tool

Thanks for looking at the situation. We have been able to get a divide fan so to say too, the issue comes when we use wave and mirror fan:
(I know its a little long but I hope this makes sense when you see it.

Am Phil and I the only people facing this issue?

Sorry for bringing this up again.

I still don’t know how to work best with this. Just saw a video of the grandma. There it is called “wing” in the programming that simply mirrors the movement or intensity effect (or whatever) with just one mouse click. I know I can (more or less) do the same with 2 groups and having 1 group Pan inverted and the other one not, but then adding a wave or a step config on top of that makes it really hard in the end.
So I am not sure if this is the best way to deal with this and how to get the best and easiest result of having “something” (so either intensity, pan/tilt,…) mirrored between the left and the right side of the installed fixtures.

The interesting part is, that this works as I would expect it to work with intensity, but it doesn’t work with movements using the “Fan <> Mirror per x”.

For me this simply looks as if the PAN is simply not mirrored. Looking at the picture ID 1 and 20, 2 and 19, 3 and 18,… should be mirrored, but they are moving into the same direction. 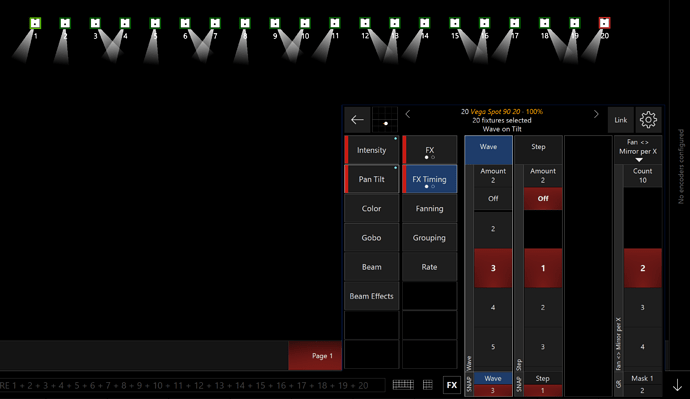 Would be cool if someone can enlight me on this with onyx.

maybe you can comment on this. I know that fanning itself doesn’t change the curve, but mirroring should def. do that.
Would be really cool to get that function as it was shown in the video as it makes this so much easier than working with different P and PI curves.